Understand What Micro Frontends are and Why Module Federation is Useful

The idea behind micro frontends is to think about a website or web app as a composition of features which are owned by independent teams. Each team has a distinct area of business or mission it cares about and specialises in. A team is cross-functional and develops its features end-to-end, from database to user interface.

Micro frontends are an emerging architecture inspired by microservices.

Building with micro frontends is a modern strategy for deconstructing a monolithic codebase into smaller parts, in an effort to increase the autonomy of each team and the delivery throughput.

Each part can be considered a micro frontend, which will be deployable independently of the others.

In this post, we will be looking at building a React application that leverages micro frontends with module federation.

Before deconstructing the monolith, you should choose the right approach to split your pages. This is useful to understand better and segregate the domain of your application (e.g. login page, private area…).

The most common approaches are vertical split (page-based) and horizontal split (parcel-based).

A vertical split approach is the easiest as it allows you to have only one micro frontend at a time on each page.

This results in the closest developer experience to a Single Page Application in terms of tools, patterns, and best practices, which remain the same.

A horizontal split allows you to have multiple micro frontends at a time in each view.

Usually, it is the most common strategy in business domains with multiple reusable parts. 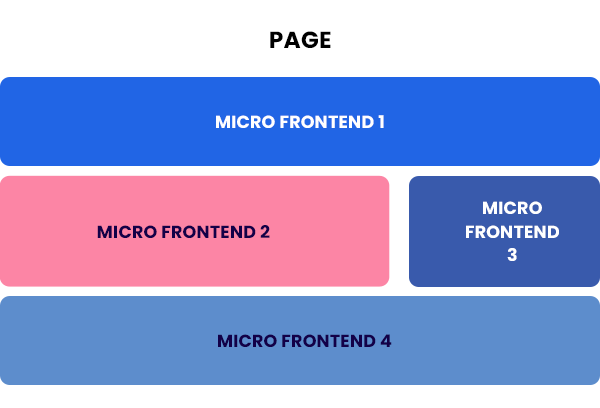 Once you have chosen the right split strategy and created your micro frontends, there is one last thing to do: decide how to compose them.

The available techniques are client-side, edge-side, and server-side.

In client-side composition, each micro frontend is dynamically assembled by the client (e.g. the browser).

There are different ways to implement this:

In edge-side composition, each micro frontend is assembled by the edge (e.g. CDN) using the Edge Side Include (ESI) specification.

It is not supported by all the CDNs, and each vendor (Akamai, CloudFlare, Fastly…) behaves differently.

In server-side composition, each micro frontend is assembled by the server.

Even in this case, there are ways to implement it:

The primary use case for module federation is the distribution of software at runtime, with additional support for fallbacks. It works on both client and server.

Although it was born as a Webpack Plugin, now communities are trying to implement the same principles for the other bundlers (Rollup, Vite…).

Here is a list of terms commonly used, that will be useful to better understand the rest of the article:

The host is an artifact that includes the initial chunks of our application, the ones that will be used to bootstrap it.

The bootstrap phase is pretty common, and starts once the window.onload event has been triggered.

The biggest difference lies in the management of the components: normally they are included in the application bundle, increasing its size.

With module federation, they are not embedded in the bundle but are just referenced to a remote.

This allows us to have a smaller bundle size and a reduced initial load time.

Note that as an application has multiple dependencies, a host can also have multiple remotes.

The remote is an artifact that provides the code to be consumed by the host.

The provided code can be both shared components or common dependencies which will be used by different hosts.

The bidirectional host is an artifact that can be both a host or a remote, consuming other applications or being consumed by others .

The federated objective applies to the code which uses the module federation.

Now, we are going to create an example project to replicate the scenario of the following picture: 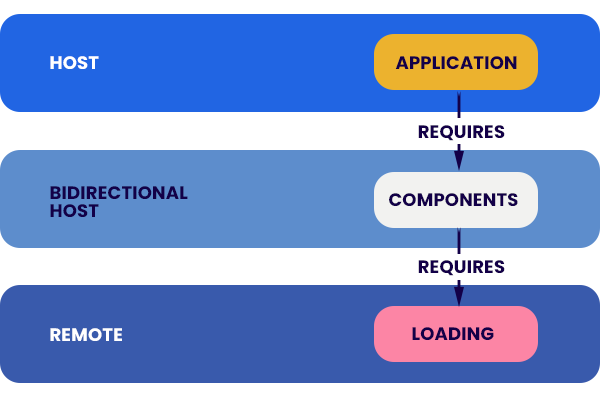 In this scenario, we have a host called application, a bidirectional host called components, and a remote called loading.

In plain English: firstly, the remote will expose a single loading component.

Secondly, the bidirectional host will import the loading component, apply some CSS and then re-expose it. Additionally, it exposes a rounded button.

Finally, the host will include these two components that will be shown to the user.

Before diving into the code, you should know that:

We are sure this is just a remote because we are just exposing something;

When it is loaded individually, it renders only the Loading component:

This time, it defines that:

We are sure this is a bidirectional host because we are defining both the exposed components and the remotes to import;

When it is loaded individually, it renders the exported components:

This time, for the source code, take a look only at the App file content.

It contains the components imported from the bidirectional host:

This is the last module federation configuration:

We are sure this is a host because we are defining just the remotes to import. Please also note the absence of the filename configuration;

In the end, this is what the user will see:

Applying module federation we have found some trade-offs, which will be explained below:

Exposing parts of the application in such a dynamic way allows us to have:

Module federation is a panacea that can be used everywhere, you must know the shape of your application really well to apply it correctly.

As you can see, it also requires a little bit of configuration, which might not be so familiar to developers that have always worked with SPA.

Without a proper study of the size of each remote or bidirectional host, the final result can be compromised due to the high number of network calls to retrieve each JavaScript file. You should avoid creating lots of small files.

Need help with Frontend development? Contact us today to organize a discovery workshop.