Let’s look at managing application state from a different perspective. If you’re a frontend developer or a backend developer, you probably deal with state management daily. XState is a JavaScript/TypeScript implementation of the finite state machine and statecharts that will make your life easier.
The companion code to this blog post is available at https://github.com/nearform/react-xstate-demo.

The what, why and how of state machines

Before we get down to the nitty-gritty of using XState, let’s look at the state machine and its building blocks. 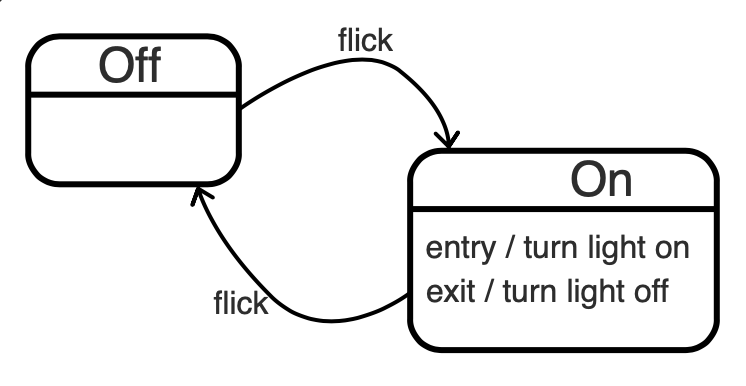 A simple on/off switch with two states. Image from https://statecharts.dev/

What are state machines? 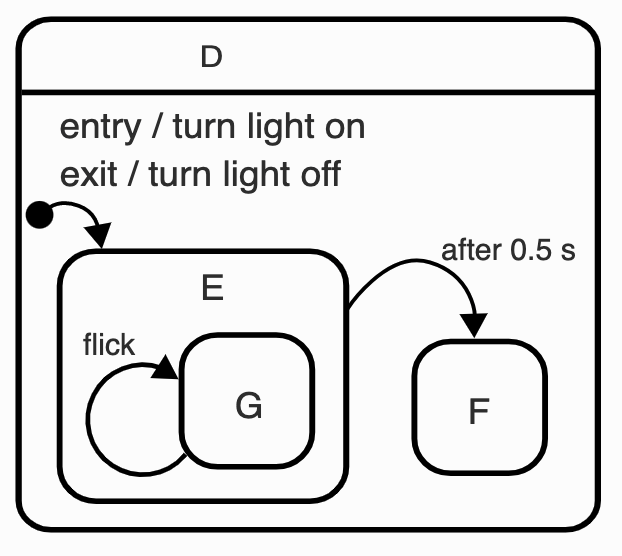 What are the benefits?

State machines are a common way of describing states in a business process. They are an excellent communication tool because they are generally understood (or can be learned) by people with non-developer backgrounds. And diagrams certainly communicate information better than text.

One of the things I especially like about the statecharts is that they make impossible states unpresentable.

What is a state, anyway? A state is the set of all variables in a computer program and their values at any point in time. If a program has four independent boolean variables, there are theoretically 16 (2 to the power of 4) possible states. With every new variable, the number of states increases exponentially. Five variables correspond to 32 possible states, six variables to 64 states.

What are impossible states? Let’s consider a simple program that controls a fan. The fan can be either powered on or powered off and be either oscillating or not oscillating. Let’s see what a table of all possible variable combinations would look like: 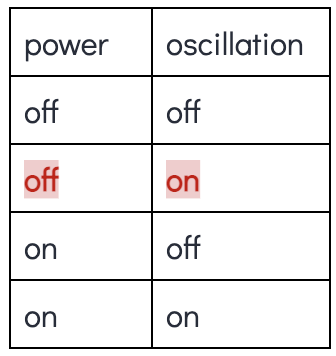 Have you noticed the combination of power [off] and oscillation [on]? A fan can’t be both powered off and oscillating at the same time. In other words, this state is impossible and should not be presented to the user (or even to a developer).

With state charts, this sort of problem is nothing you have to worry about.

A statechart of a fan with oscillation

As you can see, there are only three possible states:

We can now toggle the oscillation on and off only when we’re in the powered_on state. The impossible state powered_off + oscillating_on is no longer possible.

There are many more benefits when using state machines or statecharts, including:

As mentioned earlier in the article, XState is a JavaScript/TypeScript implementation of finite state machines and statecharts.
With regards to the fan statechart, this is what its definition looks like using XState:

How to create a state machine with XState

In order to create a state machine with XState, you import the createMachine function and pass it a machine configuration object.
Best practice is to start with just the initial state and a list of all possible states your machine can be in at one given time.

Let’s consider a simple program that controls a light bulb with adjustable brightness (33%, 66%, 100%) and can also be in an off state.

After we have defined all the possible states, it’s time to think about the transitions between the states — more specifically, what events will trigger the transitions (i.e. what could happen in the application), what the users could do and what external events might change the state.

To keep things simple, the program has just a single button that will cycle through the state in this order: off → 33% → 66% → 100% → off. It seems logical to name the event CYCLE.

Defining transitions in a state is very simple: Create an on property inside the step definition. This property holds a map from an event to a new state — i.e. if I’m in the off state and a CYCLE event occurs, I want the machine to transition to a 33% state.

This is what the diagram for this machine looks like:

However, this method means we have to keep track of the machine’s state ourselves. There’s a better way.

When the service is created, we can use the send method to send events to the state service. Just remember to always start the service with the start() method.

You can find many more in the official documentation.

It’s also very straightforward to use the XState together with React (or Vue, RxJS, Ember, Stencil, Svelte). For that purpose, you use the @xstate/react package. XState itself must also be installed as a project dependency. The documentation offers plenty of tips on how to improve performance and how to avoid unnecessary re-renders.

To make the lightbulb example from the above work in React, we just import the useMachine hook from @xstate/react and pass it the state machine we have already created.

After adding a little bit of styling, this is the end result:

You can find the complete source code at https://github.com/nearform/react-xstate-demo.

XState has a fantastic tool to paste in your state machine code and get back an interactive diagram. This makes it really easy to explore all the machine’s possible states and what events lead to the respective states. The tool is located at https://xstate.js.org/viz/.

Not only can you paste the state machine code into the tool mentioned above, but you can also use @xstate/inspect. This package makes it possible to visualise your application’s XState machine so that you can better understand its behaviour.

It all depends on how you use it

XState is an excellent tool, but, like every tool, it must be used in the appropriate way. It is not magic, and it is not going to solve all your problems.
State machines are a great fit if you need to control the application’s flow carefully. This avoids much of the traditional tooling around to keep things in the correct state.