Jason Mulligan talks about event IOT, the future of digital badges, opportunities for open source, and the Experience League

Following this year’s Adobe Summit in Las Vegas, we got the chance to catch up with Jason Mulligan, Senior Principal Architect & Developer EXL, to talk event IOT, the future of digital badges, opportunities for open source and what the Experience League is all about.

Before we delve into your world of software, code and customer experience management, can you tell us a little bit about yourself and your background?

I’m a blue-collar developer (I don’t have a CompSci degree) who fell into this career path after spending some time considering following a career as a 3D artist and an architect.  I love finding the intersection of art & science in all kinds of mediums and have developed some useful skills in my pursuit of knowledge & experience.

You’re based in Canada, right?

Yes, I am from the Great White North.

Do we detect some Irishness in that surname?

Yes, my father’s side of the family came over to Canada a couple of generations ago. The name just lends itself to so many jokes in our field with refactoring, bugs, re-aligning on business strategies, & my grandparents on my mother’s side owned & ran a golf course for many years, so I’ve always appreciated a well-timed “I’m taking a mulligan on that”.

Can you tell us about what you work on in Adobe?

I work with a fantastic small team in Adobe Experience Cloud, where I architect & develop the Experience League platform, and carry out R&D with emerging verticals & technology.

We know you were keen to work with the NodeConfEU-based digital badge and see how you could build on it for the Adobe Summit. What drove that interest?

It’s simply the coolest badge I’ve seen. Who wouldn’t want to work with it, or have one? I kept a few for myself after our Las Vegas summit, for future R&D of course.

How did you hear about the NodeConf EU badge?

I’m not sure if I happened to read a tweet from James Snell, or if it was on Hacker News, but I saw an early blog post for the ’18 badge and I immediately wanted one.

What particularly caught your attention about it?

I think it was the elegant design that caught my attention. It simply looked better than any tech conference badge I’d seen before, and after reading the blog post it stood out as simply being very well done/conceived/executed.

Did the fact that it runs on Open Source hardware and Software present opportunities?

Absolutely yes! The EXL tech stack is primarily OSS/node.js based, so it stood out as a natural vehicle into physical space, allowing me to apply the EXL platform to a conference booth very little effort & a whole lot of affordance. 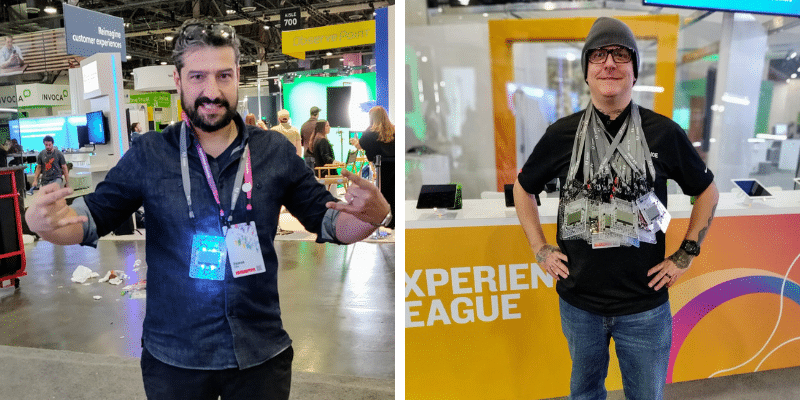 How important was it that it runs JavaScript?

It was the deciding factor from my point of view.  Impressive tech is always fun to use, but sometimes it’s a pain to program. I think JavaScript removes a barrier to hardware programming; it becomes “easy” if you have the right hardware, and the NodeConf EU badge is definitely amazing hardware.

So what is Experience League exactly and how did you see the digital badge delivering value?

Experience League is a new Customer Enablement platform launched by Adobe in early 2018 for Experience Cloud users. Adobe has a lot of impressive tech, but getting started with it can be daunting sometimes, and we’ve created something new that turns the problem domain upside down, and makes learning fun & easy… but it’s not just a website or application, it bridges digital & physical experiences through applied tech like the NodeConf EU badge, and our amazing teams around the world that hold Experience Maker events. 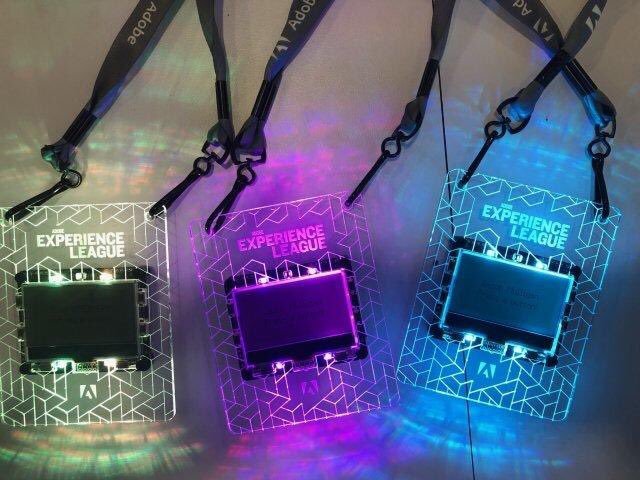 What was your original intent for the badge?

I wanted to provide a hardware platform that would afford anything I’d be asked to deliver for our Las Vegas Summit. Delivering ‘impossible’ things is what I do for Adobe, and this gave me a massive head start on the work. I needed a tool that could be as flexible as the EXL platform.

Has Adobe used digital badges before at events?

Yes, but for our Creative Cloud/technology focused events; those were impressive badges that were produced in North America, but I think the Espruino hardware created by Gordon Williams was on another level. The last tech summit badge I saw was pretty similar to the first NodeConf EU badge, so naturally, the revision of the NodeConf EU badges we used was an evolutionary step or two forward.

When you went about customising the badge for the Adobe Summit, what changes did you make and why?

My massive contribution was the idea of a back plate to avoid it catching on clothing. We got a revision of the hardware from Gordon that had different buttons; beyond that, I didn’t want to make any changes – it was pretty much ready to go out of the box. General affordance was my goal, and the NodeConfEU badge hardware delivers that.

What can you tell us about the software you created specifically to support the badge?

I’d love to! I created a conference booth platform which I’ve named Hellcat (dedicated to my cat Halo, that passed away in ’16) designed to run on-premise, which was comprised of multiple iPads for people to ‘sign in’ with their conference badge; a core server driving authentication, authorization, welcome boards, leader boards using node.js & web tech (SPAs, & EventStreams); multiple Raspberry PIs acting as BTLE stations which could do multiple functions, such as tracking people through a space, or gamifying their time in that space; and the magical “loader” which retrieves a data payload from the core server to then deploy to a random badge in a pool of available badges.

That last component was fun.  I really enjoyed asking people which badge they thought they’d get because it only took a few seconds to drop our badge app onto the hardware via BTLE loading. I parallelized this after our Las Vegas event using a Raspberry PI Clusterhat & NGINX doing random load balancing to the “loader” app which was now running on each Raspberry PI Zero W.

So you used Node.js  to build your software?

Yes, very much so.  Hellcat is a blend of noble & bleno (BTLE stations/loader), tenso (core API server/loader), & ionic (iPad). It’s node.js all the way down.

Every event has its glitches, particularly ones of such scale as your Adobe Summit – what was your no.1 biggest challenge?

Eccentric Cisco DHCP features are likely going to cause a Raspberry PI many problems, followed closely by an 8:1 bottleneck in Las Vegas (iPads:loader), followed thirdly by my BTLE stations inside of 2″ thick MDF cabinets (this was easy to remedy).

Did the badge relieve any of the challenges that your event organisers would have typically encountered?

I think it acted more like a creativity bomb; once people realized the possibilities of what we were going to deliver, they ran with the affordance in ways I hadn’t considered. We were also able to pivot the experience in real time when we encountered a deployment issue on day 1 for Las Vegas; in my opinion, this was the true value of the badge + platform. How many tech companies can claim they can change the entire experience in a minute?

What did delegates mostly use it for?

We flipped the engagement model such that people were approached by experts in context to what they were interested in at that time; badges would light up with 1 of 4 potential colors, which removed a lot of friction points for delegates & the attendees.

How did attendees respond to it and what was its most popular feature?

There was a blend of amazement and curiosity; it seemed to wow everyone for different reasons.  It’s most popular feature? I want to say it’s the haptic motor because no one expected it.

Will you be using the badges again at future Adobe events?

Yes! I took them to our EMEA Summit in May’19, but infra issues blocked me from deploying them. We’re looking at Las Vegas’20 as the next big event for them.

It sounds like you’ve gained a lot of experience with the badge which is fantastic and it’s great to share this with others. For anyone looking to further build on the badge for their own events, what one thing would you change and why?

I’d swap the batteries to be triple-A if you don’t mind the added thickness. Secondly, I’d change the buttons on the badges; that’s the only tech part that confused the attendees, as they blended into the badge too well. I would caution that it’s easy to underestimate the effort to support a productized device.

The Adobe Experience League sounds like a great initiative for marketers and creatives.  Where should people go to find out more?

They can learn more about it at https://experienceleague.adobe.com, and watch for news from Adobe; Experience League is a new core component for the Customer story of Experience Cloud.

The NodeConfEU badge has evolved in features since its inception in 2017.  We’re looking forward to making it even greater again this year at NodeConfEU 2019.  There’s a wealth of untapped opportunities to be explored and tested in IOT, cloud services, Data Analytics & Visualisation, ML and AI, Health/Wearables services, Communications (Cellular, IOT, Mesh), Crypto services and more.  We’d love to involve & collaborate with more people in its development. If you’d like to learn more about the badge and the possibilities it can present to your area of technology, contact Conor O’Neill, our Chief Product Officer at NearForm.  You can hear a little more about the badge from Conor here at our NodeConfEU fireside chat.

Note there are a small number of core badges available to purchase on the Espruino site for anyone who wants to play with the technology.

Like to know more about NodeConf EU 2019? Find out more about this year’s conference here.