This week I was lucky enough to attend both FinJS and the FinTech World Forum in London – two very different events but with lots of crossovers.

A fun aspect for me about the latter was that it was held in the Kensington Conference Centre. The last time I was there was in 2007 for the Future of Web Apps conference with a big contingent of Irish startups. I thought it might be interesting to start this post with a comparison of what was being talked about back then and where we are now 12 years later. And how does this relate to FinTech?

After doing a trawl of some blog posts (including my own) from back in 2007 and comparing them to the areas I saw discussed this week, I came up with this list of hot topics and challenges:

It’s amazing how the tools and companies have changed over the 12 years but not the challenges. The biggest difference is that Open Source won and Open Standards won. We believe they will continue to win as we build the next generation of high-performance web runtimes and frameworks for the newly emerging cloud architectures.

Looking back even a few years, NearForm’s approach of user-centric rapid agile delivery, using optimised Open Source stacks plus a focus on high-performance architectures, was actually not very appealing to a lot of traditional slow-moving financial organisations. There was much sucking of air through teeth about “toy” languages like Node.js or “non-Enterprise-level” infrastructure like EC2.

But that has all changed.

Traditional banks are now being disrupted by faster nimbler newer companies with no legacy systems and no legacy customers (to borrow a phrase from Starling Bank yesterday). They have to embrace our approach or they will be roadkill.

Similarly, whilst Financial Trading systems have always been obsessed about performance, they have hit the limits of what the older stacks can provide, particularly around User Experience, flexibility, speed of delivery and ease of deployment. This is why “consumer web” stacks have begun to take over the Enterprise.

Looking at the specific events themselves:

Wow London! I was shocked by the numbers of people queuing outside the amazing Leadenhall Building when Dave Clements and I arrived. There were several hundred attendees. For a mid-week evening event about JavaScript in the Financial industry. This is one scorching hot topic obviously!

The meetup is organised by OpenFin who have an extremely interesting Electron-based “OS for Finance”. It runs on normal desktops but gives you highly-secure Desktop Web apps with application interoperability, notifications, intents, distribution, etc etc. Plus it’s Open Source and Open Standards driven. 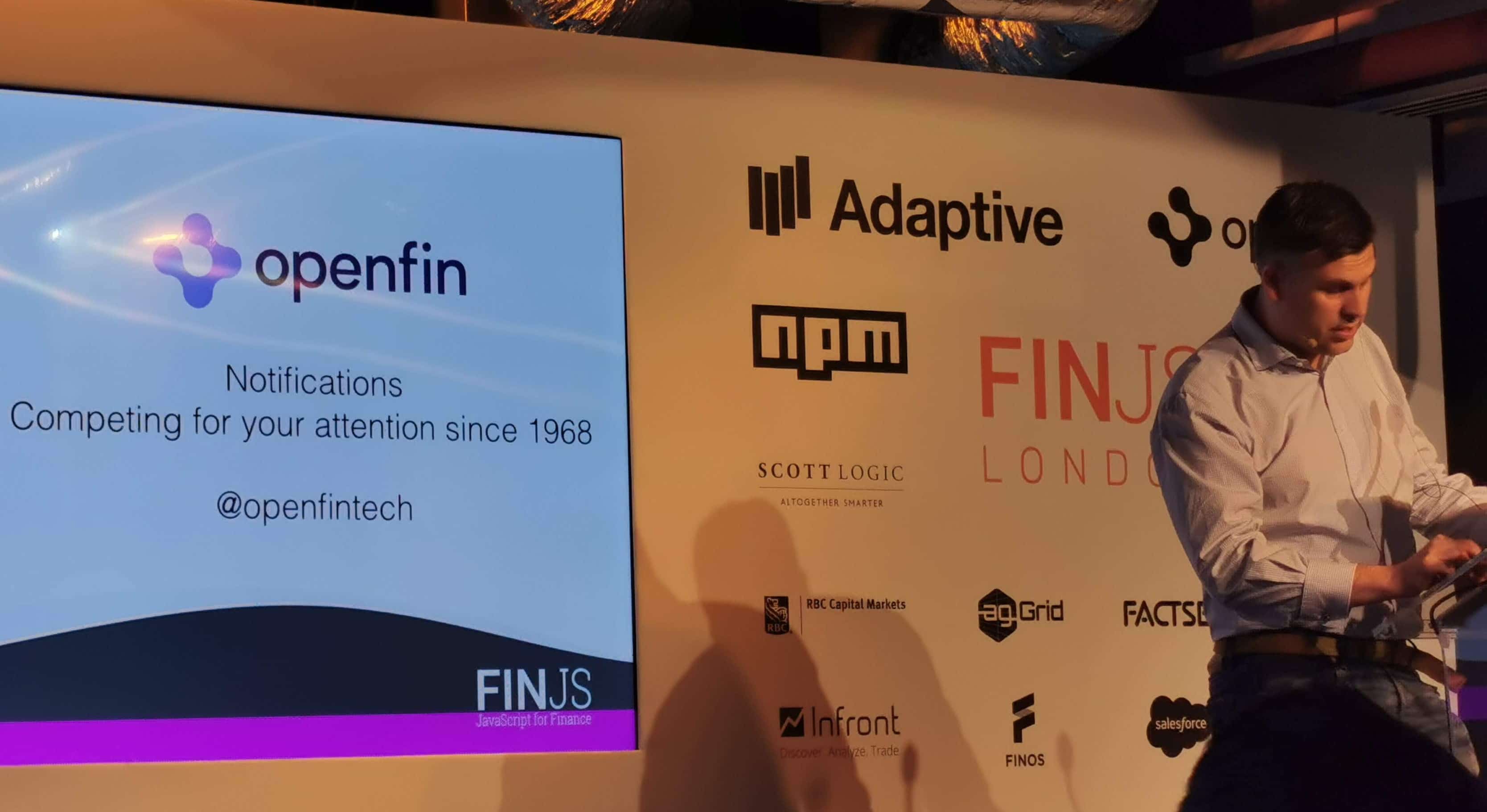 The talks were universally good and ran the gamut from the horror of traditional notifications to ultra-high-performance data grids for financial web apps to entirely new ways of thinking about user interfaces.

But the same messages came through in almost every talk:

Legacy systems remain a huge challenge for everyone in Finance. When AngularJS is seen as bleeding-edge and some orgs are still building things with WPF, there is so much work to be done by these companies to catch up.

Basically all of the same things we in NearForm talk about to our customers are the absolute top priorities for those working in FinTech. But with the overarching point, as ever, that this is fundamentally about delivering value to your business and to your customers/users.

FinTech World Forum – How to innovate in a world of legacy

If FinJS was a strongly tech-centric event, FinTech World Forum was more focused on business challenges for FinTech and where things like cryptocurrencies are going. The words “compliance”, “regulation” and “legacy” were used time and again.

You will be very familiar with some of the presenting companies including Mastercard, IBM, HSBC and Barclays. Others not so much.

The talk highlight for me was by Julian Sawyer, COO of Starling Bank. He really dug into the meat of payments as a service and banking as a service. Their focus on APIs, SaaS and white-labelling look like a winning approach to me. Their fully agile development methodology was refreshing. Their brave decisions to have no legacy systems and no legacy *customers* were extremely impressive. They only have native mobile apps on an AWS back-end.

He also made some good points about the stats from the big banks and how some of them are now calling themselves FinTechs. One of the biggest banks claims to have 5 million mobile users. But they have 25 million customers. So what are the other 20 million doing and why aren’t they switching to mobile? Are we back to looking at UX problems and low-performing legacy back-ends perhaps?

Overall I found the event very useful but thought that there was an excessive focus on talks about various coins and blockchains. Several of those talks did an excellent job of framing many of the problems and challenges in the global financial sector but failed to properly explain why a cryptocurrency or blockchain was the best solution to them. There were a lot of “if all you have is a hammer” moments for me. However, I very much appreciated the notes of caution expressed by Lasse Meholm of DNB Bank in Norway, particularly around timescales for “success” in crypto. 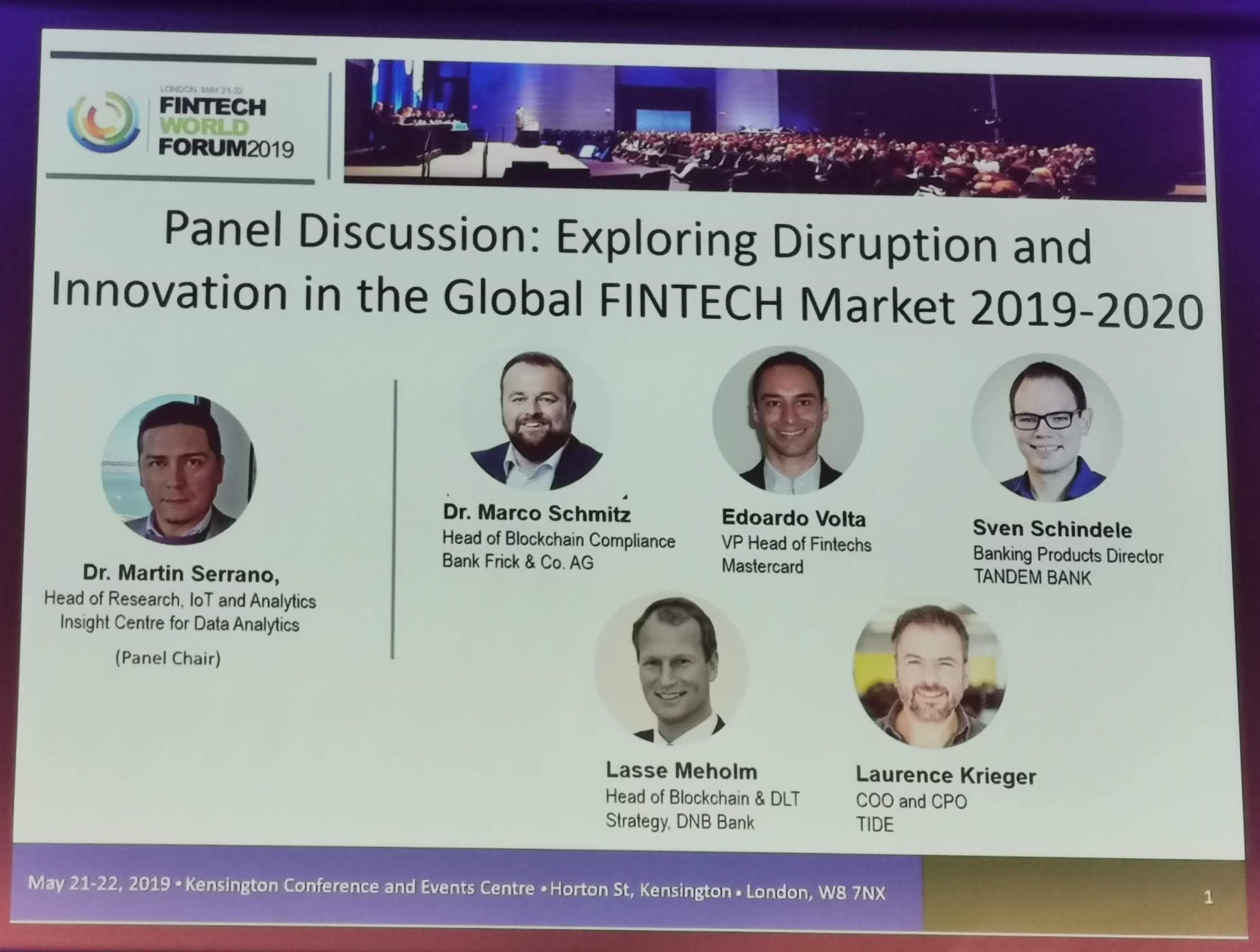 One important point was made several times about the mix of people working in FinTech. It’s not a silo of Finance-only people. In some cases, Product Managers and Developers have no Finance experience at all but they are bringing in critical outside technology experience into FinTech.

We heard a related message from multiple attendees at the IT Directors Forum in Watford last week. That was the first time some of them had ever attended an event that was not specific to their vertical. So for example, those working in insurance felt they had been missing out on global tech advances by only attending insurance-tech events. It looks like the FinTech sector is avoiding this problem and embracing all that the broad technology landscape has to offer.

As I said earlier, FinTech in 2019 feels a lot like Web 2.0 in 2007. Everything is moving fast and lots of things will fail, but the foundations for the next decade are being built. It’s an incredibly exciting time for us to be involved in the industry right now.

Conor O’Neill is Head of Product in NearForm. He is responsible for all productization activities in NearForm and is working closely with NearForm’s Open Source and R&D teams to evolve the web platform for FinTech and the Enterprise. You can connect with Conor on LinkedIn.

NearForm has been instrumental in bringing Node.js itself and high-performance JavaScript to its current dominant position in software development. In the past 3 years alone, there have been over 3 Billion downloads of NPM modules that NearForm has built, supported or maintained. Anyone in FinTech and beyond working on high-performance Fullstack JavaScript is almost definitely using code for which NearForm is responsible. Our delivery teams have been designing and building solutions with these stacks for Enterprises globally since 2011.