Founded in 2014, Datumize is a Spanish technology company whose software captures dark data as it flows through a corporate network or locked-in proprietary system. Dark data refers to the unstructured digital information an organisation generates during day-to-day operations, such as failed product searches or internal machine metrics. Recent analysis estimates as much as 90 percent of all data is “dark”, and Datumize recognised the potential of this untapped data to contain powerful insights. Through actionable analysis of dark data, Datumize customers can make better business decisions, from identifying new revenue streams to optimising operational efficiency and more.

As a start-up, Datumize is keenly focused on gaining market share. Their flagship offering is fully managed using Datumize Zentral, a self-service dark data collection and processing platform — and despite being a well-established product, the opportunity to expand user adoption is significant.

Datumize understood that, in today’s competitive data market, an engaging user interface is an important differentiator. So they sought to create a whole new user experience (UX) for Datumize Zentral.

The team recognised that Zentral’s interface lacked a logical flow, provided poor visibility of key functionality and used a cryptic naming convention that often confused users. They needed an interface that enabled all partners and users to navigate the platform’s highly complex technical configuration. The goal was simplicity without sacrificing functionality.

Although Datumize had a vision of what they wanted, they didn’t have expert UX designers in-house — which meant success depended on finding the right partner to work with.

Usually the result of graphic design is poor because the agency just repeats what they heard. With NearForm, it was different. They have a design-led approach which really came across in the onsite workshop. NearForm’s facilitation helped us reach alignment across the team. Their active participation meant all our ideas were rooted in what was best for the user. In a nutshell, the collaboration was excellent, and we got tons of functionality implemented. The return on investment of ‘first time right’ was worth every euro.

NearForm began with a three-day, onsite Discovery Workshop that included a series of focused exercises. These exercises were either visual, task or step oriented, an approach that helped the Datumize team appreciate that everyone thinks differently.

The workshop format enabled the complete team to move rapidly through the core set of activities, including user-centred design canvas, user flows and competitor analysis. The team captured ideas, had discussions and made decisions collectively, guided by the expertise and knowledge NearForm brought to the workshop. As a result, the team based their work on informed decisions, made with a view to create the best solution for Datumize and their users.

Getting people from various disciplines working together for a few days is instrumental to the success of the workshop. It helped to frame the problem and solutions from multiple angles and, more importantly, get the team to own the product.

Focusing on a data integration engineer persona, NearForm worked with the Datumize team to link the core functionality into the user’s data pipeline workflow from beginning to end. This approach enabled NearForm to focus on the UX and front-facing functionality, seeing the business, customer and technical requirements through the eyes of a Zentral user. After three days, the team had the prototype blueprint and an agreement on where the project needed to be in three months.

After the workshop, the combined Datumize and NearForm team worked together, remotely,  to redesign and build the user interface and design system. The distributed team collaborated effectively and efficiently using daily standups and regular communication. Weekly demos to the Datumize management team provided clear visibility of both progress and features.

The output from the workshop allowed NearForm to redesign and build the Zentral user interface from the ground up, with role-based access for different teams. The click-through InVision prototype provided a baseline visual reference that was understood by all stakeholders, both business and technical.

Using the Datumize Zentral codebase, NearForm worked with the Datumize engineering team to develop a modern, touch-compatible, React web application that links to the series of microservices that a Datumize user needs to build and deploy their data pipeline.

Given the limited in-house design and UX development resources, NearForm developed the new interface with the extensibility of the Datumize portfolio in mind. NearForm provided design artefacts that ensure the team is self-sufficient — enabling them to create new concepts and web pages themselves by mixing and matching recurring patterns and using icons and grids from the library.

The team at Datumize had a clear vision for Zentral and how it should behave in users’ hands. Our role was not to reimagine Zentral, but to facilitate moving from that vision to an actionable execution plan. 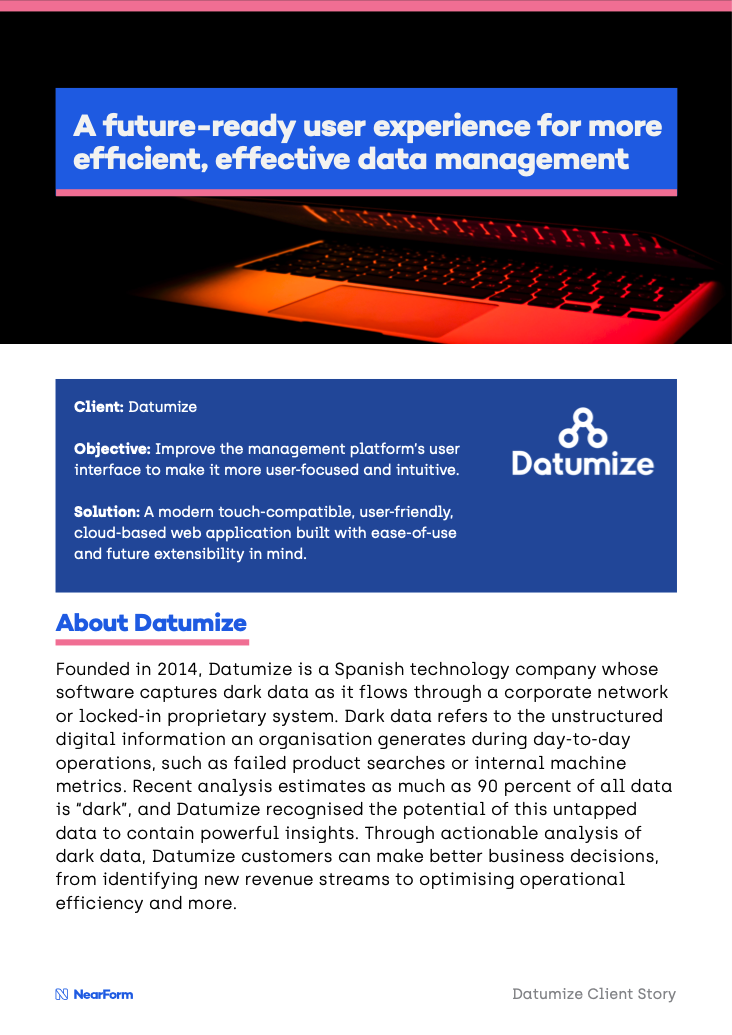 Within 45 days, the Zentral platform was redesigned to be more user-focused and offer a better user experience. Beyond a working codebase and prototype and design assets, NearForm delivered set guidelines for future design and development, which lets Datumize reuse established patterns for new components.