Like any virus, COVID-19 is incapable of moving under its own steam. Instead, it’s people who move, and the virus goes with them. And while this may sound like stating the obvious, it’s an issue coming into sharp focus as the US gears up for two major events in a single month that require significant people movement — and therefore will place a premium on contact tracing.

On November 3, the US goes to the polls to elect its 46th president, while just over three weeks later, November 26 will see the traditional mass movement associated with Thanksgiving.

In the 2016 election, more than 136 million Americans turned out to cast their vote. Even amidst the pandemic, there’s every reason to expect that at least as many voters will participate this November. While voters typically stay close to home to vote, the sheer numbers involved have major implications for potential community transmission of the virus.

It’s a lot more difficult to provide an exact figure for how many Americans will travel to celebrate Thanksgiving. In 2019, AAA reported that over 55 million people planned to travel fifty miles or more to visit friends or family, with many travellers crossing multiple states en route to their final destination. The number travelling shorter distances is significantly higher.

What precautions exist for those longer travellers as they move from state to state? Will their tracing app work along the route? Thankfully, the NearForm solution offers full interoperability between apps based on the Google/Apple Exposure Notification (GAEN) technology, meaning it can dovetail seamlessly with bespoke apps from other states, as well as with generic Apple/Google offerings.

While these basic Exposure Notification (EN) apps will undoubtedly offer a level of security compared to not having an app at all, the NearForm solution has the added advantage of being more customizable and centred on the particular needs of the client state. This can involve anything from providing symptom tracking, to providing direct links to local medical services or sources of verified information on COVID.

Users benefit from interoperability because there’s no need to download an app for every state. Those who have downloaded a NearForm-built app can simply travel as normal, safe in the knowledge that they’re enjoying the protection of a superb exposure notification and contact tracing app no matter how many states they may pass through.

Of course, creating a highly-tailored contact tracing app for an individual state takes time — but maybe not as much time as you’d think. Our experience customizing apps for other US states shows that we can have a fully-tailored app deployed in time for Election Day in any state that starts an engagement immediately.

While everyone wants to see a healthy voter turnout on November 3, it needn’t be at the expense of curtailing the spread of COVID. By having a feature-rich app on offer for residents, participating states can safely encourage people to exercise their constitutional rights, while making sure they’re as safe and protected as possible.

It’s not just the state authorities that benefit. Individuals also enjoy a greater sense of reassurance as they venture out, which is particularly important for members of more vulnerable communities. Having a fully-featured state app helps to empower individuals to protect themselves, giving them a sense of ownership over their own health and well-being.

At the same time, of course, having a state app is hugely beneficial to public health agencies to slow the spread of COVID-19 without compromising user privacy.

The NearForm solution goes beyond mere exposure notifications to support existing contact tracing efforts in the participating state and is the most used codebase for Exposure Notification apps globally. In our native Ireland, the interoperability aspect was fully stress-tested as we worked across the border with Northern Ireland. Since then, customized versions of our app have been rolled out across other European countries and a number of US states. 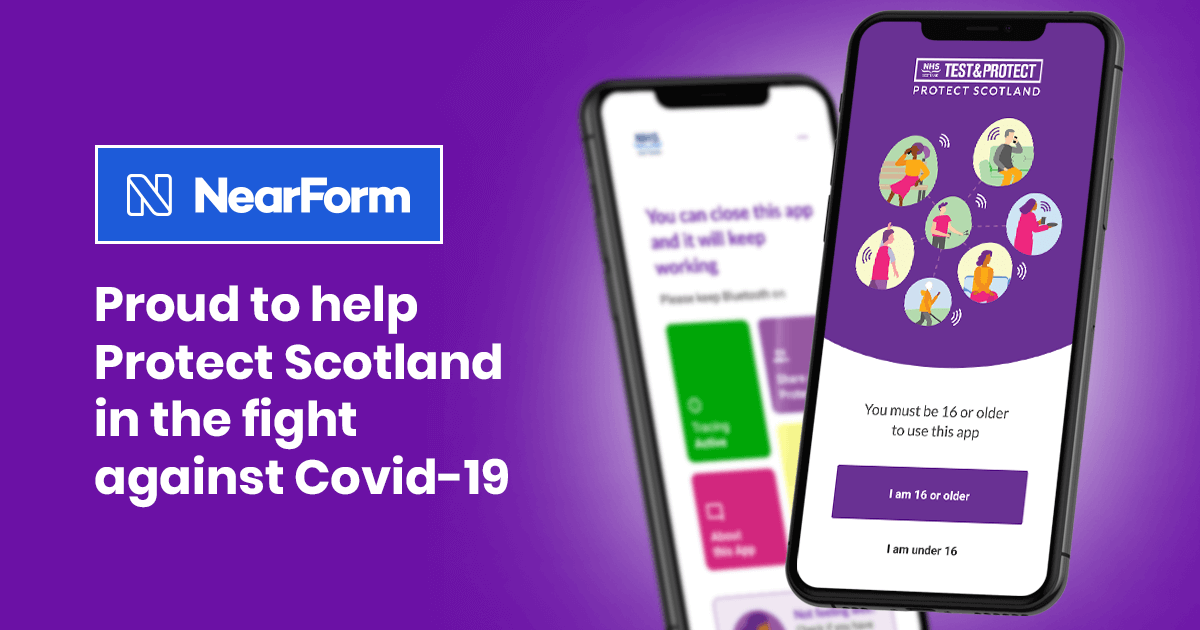 Proud to help Protect Scotland in the fight against Covid-19